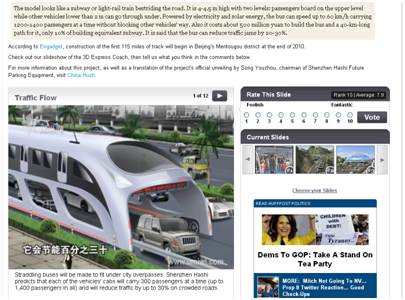 After reading an article on “3D Express Coach” (also called a “three-dimensional fast bus”) that will allow cars less than 2 meters high to travel underneath the upper level carrying passengers at Huffington post today I am enough motivated to think and write on this good aspect of the moving East.

Few years ago as a kid I always saw my elders (parents, relatives, friends) all running in the race to exist. Majority of the population in India was a part of the survival game only. I belong to the City Beautiful, Chandigarh in India where bicycles and scooters used to rule the road while cars were only reserved for the rich/government and the government drivers. As most of the population was all trying to make both ends meet and finally may have some small house to call of their own; only rare could think of innovation. But today things have totally changed! With the changes has come lot of good and long lasting developments.

A year ago I was reading an article in one of the famous journal (I don’t remember the name) which published that in next 50 years the innovation ground will slowly and slowly move to the East to countries like India and China. These countries will become the breeding ground of new breathtaking inventions. Being a part of the economic and social growth of these countries I very well understood why the author (he was some American economist) was saying this. The economic growth that these countries have seen in last few years because of the offshoring industry is mammoth. The economic growth has contributed a lots of positive to social, infrastructure and mental growth too. All this is leading to more on entrepreneur and innovation mindset development.

India is changing, I noted.

Pradeep Gupta, CEO of Cybermedia and president of TiE Delhi, concurs: “I have been talking on entrepreneurship at various colleges for the last two decades. I always ask a question: How many of you want to be entrepreneurs?” he says. “Earlier, maybe 5% [of] hands went up; today a quarter of the class raises their hands.”


Two of the key factors that have contributed to this development are: